I stumbled upon this today and was very glad I did!  I never realised that this had ever been filmed, but it shows Tito Gobbi preparing for and performing the Te Deum from Puccini's Tosca on television. 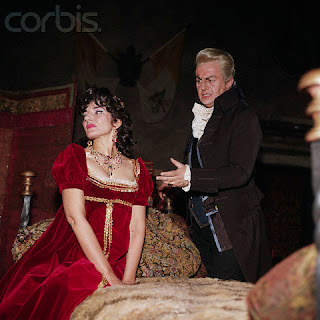 Gobbi is synonymous with the role of Baron Scarpia, performing it many times with Callas, Tebaldi, Stella, etc.  He brought a violence to the role which set the standard for many baritones to come.  He was famous for his make-up artistry and the beginning of the footage shows the master at work, it is a nice touch.  We are fortunate to have close-ups of the infamous sneer as well, it is gorgeously hammy, and is a reminder of stagecraft from days gone by.