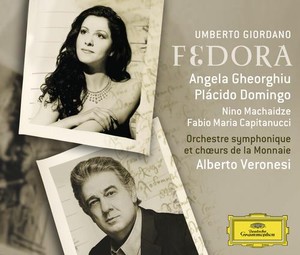 If ever there was an operatic warhorse suited to an aging spinto, Fedora is that opera.  Fortunately we have here a recording that breathes life into the Verismo closet, one which restores my faith that we do still have young (and not so young) voices that can do this music justice.
Even though many view this opera as somewhat second rate compared to its predecessor, Andrea Chenier, I am rather fond of this score, it has some of the most elegant and stylish music Giordano ever wrote, including a kick-ass love duet that if sung well, is a thrilling experience.
This recording is up against formidable competition, with recordings from the likes of Magda Olivero, Renata Tebaldi and Eva Marton all commercially available, they each have their own selling points, the Olivero being the most searingly dramatic.
I must admit I was somewhat hesitant in approaching this recording, I have often found Angela Gheorghiu rather cool in her interpretations, very intelligent however, almost too much so, but somehow she never quite seems to inhabit the character as much as she would have us think.  Couple that with an aging tenor as the hero and I thought we were headed for disaster.
Wow was I wrong!  Gheorghiu proves herself more than a worthy successor of those aforementioned Diva’s, the darkness of her timbre is entirely appropriate for the role and being closely miked works to her advantage, especially in the parlando scene in Act 2 where she gains the confession of murder from her future lover, Loris Ippanov.  In the extended love duet of Act 2 she rises to the vocal challenges and her phrasing of the long vocal lines here are impressive.  In fact here she almost outshines Olivero and Tebaldi in vocal colour and confidence (even though Tebaldi disappointingly eschews the rise to the top C in the act 2 duet), it is a comparable portrayal to Olivero, mostly I think due to the similarities in their vibrati.  As much as I do admire Marton's portrayal, it is not in this same league.  It is clear Gheorghiu enjoys this role very much and her death scene is gorgeous.  I can honestly say that she has completely won me over with this recording and viewing her work in a new light, I look forward to revisiting her other recordings.
And now to Placido Domingo.  While obviously no longer in his prime, he still shows he has what it takes to be romantic lead.  Over the passage of time his voice has retained its beauty, the only signs of age being a widening vibrato and a tight, constricting of notes above the stave.  Domingo was never really one for sustained high notes a-la Corelli anyway, but unfortunately both of these mar what is quite a lovely Amor ti Vieta.  Having said that though, elsewhere, especially in the confrontations with Fedora in acts 2 and 3, he produces heroic tones and eloquent phrasing to be envied by many a younger singer.  He does not surpass Mario del Monaco for pure machismo and dramatics in this role, nor the vocal sumptuousness of Jose Carreras, but one is drawn to his interpretation nevertheless.
The supporting cast sing their roles adequately (I miss you Tito Gobbi!), with no real stand-outs of note, the males sounding mostly gruff, the girls rather shrill.
Alberto Veronesi obviously has an affinity with this music, his phrasing is eloquent and dramatic and in the dramatic passages his orchestral forces provide the necessary fire.  One thing I did admire about his reading is his ability to support his principals, in particular Gheorghiu, when they wish to open up and revel in the soaring melodies.
All in all a fitting tribute to Domingo, this release coincides with his 70th birthday.  Personally I am very grateful for this recording of a sadly underrated opera, it restores my faith that the days of verismo voices aren’t quite yet over.  I am quietly praying that Gheorghiu records Zandonai’s Francesca da Rimini, if she did that I think I could die a happy man.