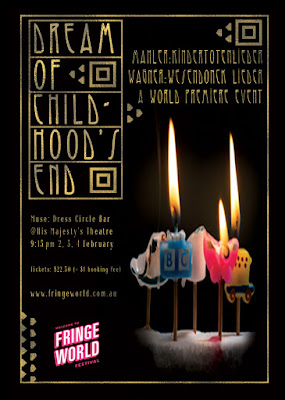 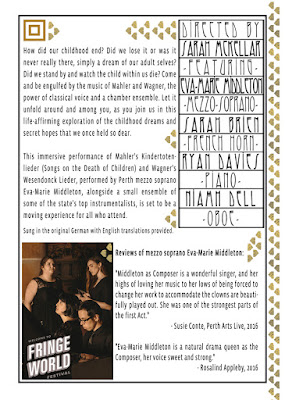 Here is artwork I've been working on for a show in the upcoming Perth FRINGEWORLD Festival, 2017.  It's called 'Dream of Childhood's End', a show devised by Eva-Marie Middleton and Sarah McKellar, both of whom I've had the privilege of working with before.
It's a wonderfully dark program destined to provide FRINGEWORLD with a much needed contrast to all the comedy and cabaret on offer.

Considering her beginnings and interest in Early Music, Middleton's voice has grown over the years and with expert guidance and training and she has blossomed into what surely must be one of the biggest, most luscious voices on the Perth music scene.
Once, after a performance as Giovanna Seymour in Donizetti's Anna Bolena, I asked her if she had considered Wagner as I felt her voice was big enough, with the right colour and heft.  Middleton's response was that she had been preparing some Wagner and now here we are working together once again on repertoire she was born for.
The programme encompasses Mayler's Kindertotenlieder in an arrangement by Robert Patterson and Wagner's Wessendonck Lieder arranged by Middelton herself.  Together they form a world premiere of these arrangements in a format devised by Director Sarah McKellar and Eva-Marie Middleton.
Make sure you book early for this event as it's been shortlisted as a must see for Perth audiences in 2017 by Rosalind Appleby in her popular blog 'Noted'.
For more information including videos and booking details head to the Event page as soon as you can.  No doubt I will be there for all performances (hey, it's Wagner!) so come and say hi and I hope to see you there.
#Mahler, #Wagner, #artsong, #lieder, #soprano, #classicalvoice, #immersive, #theatre, #childhood, #opera, #singing, #fringeworld, #hismaj
www.blairparkinson.com